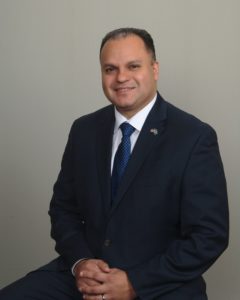 Queens resident, Jose Nieves, has dedicated his life to public service as a career prosecutor, army combat veteran and community leader for more than twenty years. He worked for the Office of the New York State Attorney General as a Deputy Chief in the Special Investigations and Prosecutions Unit.

Jose grew up in a single parent home with six siblings. His life of public service dates back more than 25 years when he served as a peer mediator in the Queens Mediation Center in Jamaica, Queens and served as a Leadership Development Specialist with ASPIRA, a national Hispanic organization dedicated to developing young leaders in the Latino community.

Jose graduated from St. John’s University, in Queens, with a Bachelor’s Degree in Criminal Justice and went on to attend Brooklyn Law School. While in law school, Jose worked on the investigation into the NYPD’s “Stop and Frisk” practices at the Civil Rights Bureau of the NYS Attorney General’s Office. He was also a member of Community Board No. 5, and for ten years Jose served as a member and President of the Cypress Hills Local Development Corporation.

Jose was a Captain the U.S. Army Reserves for over 10 years and was deployed to Afghanistan for one year in 2009.  While in the Army, Jose prosecuted sexual assault offenses and other misconduct by U.S. service members. Jose was also asked to serve as a Special U.S. Attorney for the US Attorney’s office in the Northern District of New York where he prosecuted cases in federal court. During Jose’s deployment to Afghanistan, he was tasked with the rule of law mission in the Laghman Province. He focused on advising Afghan Judges, Defense Counsels and Prosecutors regarding matters of criminal law, trial advocacy and the administration of their newly formed criminal justice system. Jose was also instrumental in overseeing major infrastructure projects that included renovation of a court house and the pre-trial detention facility. Jose served in the military until 2014 when he received an honorable discharge.

From 2012 through 2014, Jose served with the US Department of Transportation, Federal Aviation Administration where he oversaw the investigation and prosecution of various violations of the Federal Aviation Regulation (FAR) by pilots, air carriers and aviation mechanics.

In 2014, Jose joined the New York City Department of Correction, Trials and Litigation Division. There he prosecuted numerous cases involving excessive use of force and other misconduct by New York City Correction Officers.

In 2016, Jose joined the Office of the New York State Attorney General.  He served as a Deputy Chief in the Special Investigations and Prosecutions Unit, which investigates and, if warranted, prosecutes members of law enforcement who cause the death of unarmed civilians. He also conducted the unit’s first homicide trial.

In addition to his public service, Jose has served the Queens community as the Cub Master for his son’s Cub Scout Pack. He is also the Youth Guild Director and Flag Football Coach for his parish. In addition, Jose serves as the Co-President of Parent Association of his son’s school and is a lifetime member of the Veteran of Foreign Wars organization.

Jose married his law school sweetheart, Vivian Cedeno, who was born and raised in Jamaica, Queens and also practices criminal law. They are the proud parents of Cristina and Gabriel. Together, they have made Queens their home for more than 16 years.

Donate to My Campaign